Jaroslav Valečka’s (1972) paintings seem at a first glance very quietly moody, yet he sais that they portray places he spends time at mixed with his own intense vision of the places he experiences.

The Lusatian Mountains know for its vast forests, deserted picturesque villages have deeply influenced Valečka’s artworks. He graduated at the Academy of Fine Arts in Prague and Prague is also his place of residence. However, he spent a significant part of his life in the country, namely in Northern Bohemia. His bond with the dark romance of Northern Bohemia can clearly be identified in the themes of his work and leaves visible marks on the character of his artistic personality.

Valečka has never been, nor ever aspires to be an ambitious leader of artistic avant-garde. In fact, the power of his paintings rests in a particular intimacy of his work and also in an exceptionally balanced quality of his artistic production.

His art works are a part of the collections of the National Gallery in Prague, Alšova Jihočská gallery in České Budějovice, Gallery Klatovy/Klenová, Credit mutuel de Bretagne, Festung Koenigstein and many others. 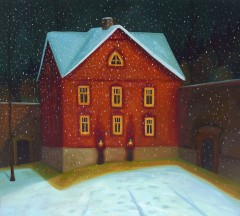